brief bio
Betty Busby played at “Arts and Crabs” with her two little sisters as a small child, and continued her obsession through graduation from the Rhode Island School of Design, with a ceramics major. She founded and operated a ceramic tile manufacturing firm in Los Angeles, and sold it after 18 successful years in order to move to New Mexico to raise her son. She is a published fiber artist and teacher, and maintains a busy exhibition schedule nationally and internationally.

Betty majored in ceramics in college and received her BFA from the Rhode Island School of Design with a focus on sculpture, and also studied fiber there (as well as at the Kansas City Art Institute). She eventually invented a process in her studio to make stoneware tiles and had to learn how to install them herself because professional tile setters refused to work with them. This led to her starting her own company in California called Busby-Gilbert Tile, Inc. She operated the firm for 18 years and then sold it in order to retire to New Mexico. The company is still in operation today.

Betty began quilt making in the 1970s. She picked old clothes out of trash cans and took apart curtains and dyed them. Today she works with all types of fabric and non woven synthetic material.

She works alone so all of her pieces are designed and handmade by her.

When asked what her design process is, she said, “One thing leads to another. A recent progression started with rocks. Then rocks + plants, then rocks + trees + water, then trees + rocks, then trees by themselves. (I’m) still stuck on them.”

I asked about the profound influences on her work and style, and Betty said, “My ceramics professor at RISD, Jun Kaneko, showed what it is like to make art #1 in your life.

She also said, “My sister, Kitty, for letting me share a house with her and have the time and space to make things.”

Betty has a goal of helping to make fiber art more fully integrated in the fine art world. She says that more exposure and aiming to reach the highest level in the medium is what will get fiber artists there.

As a member of Studio Art Quilt Associates since 2008, she has volunteered to help organize regional exhibitions all over the world, giving the artist members the opportunity to hang their work in gallery settings.

When asked what the weirdest thing she ever made was, she said, “I chopped the head off a dead mouse I found and substituted a sardine head. Didn’t smell very good.” Yikes! I think I’m glad she prefers to work with fibers. 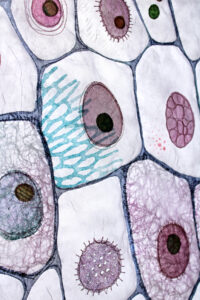 I am pleased to say that Behold the Onion has been accepted to Quilt National ’23, very honored to be in the company of such accomplished artists.